Tula Pink City Sampler? Yeah. About that. I’ve got about 25 blocks finished but I’ve found the quarter-inch foot on my machine to be just off so I’ve had to unpick at least three blocks because they’ve come out too small. With 1”-square pieces? Less than fun.

And since I’m so good at quilt-alongs, I signed up to do another one–the Broken Herringbone over at Molli Sparkles. So far I’ve made… one block. It’s a wicked awesome block and I’m quite in love with it, but… one block.

Craftsy was having a massive sale last week, so I bought three classes that I totally shouldn’t have given my pending unemployment, but I did, so there. One was Jacquie Gering’s Improvisational Piecing,* (affiliate link, see disclaimer below) which holy awesome, people! Am totally going to make a couple of the quilts she features.

The other was Angela Walters’ Dot to Dot Quilting*, and, ahem, it’ll be a while before I get to that one, I think

The last one was Tara Rebman’s Quilt-As-You-Go Patchwork Bags*. Here’s the thing–I had seen the QAYG technique before I’d even heard of Tara Rebman, when I came across this stunner on Flickr, based on this tutorial, but I really wanted the Tinker Tote bag pattern, which is AWESOME, so I ponied up the cash (which, um, even after a discount was kind of a lot of cash for a pattern).

I did watch the whole thing in one go, though I haven’t started on the bag yet. What I did do in my uncomfortable state on Monday was sit in front of the machine for a couple of hours and try out the technique. This is what it looked like as I was sewing:

Quilt As You Go in progress

And this was the final product: 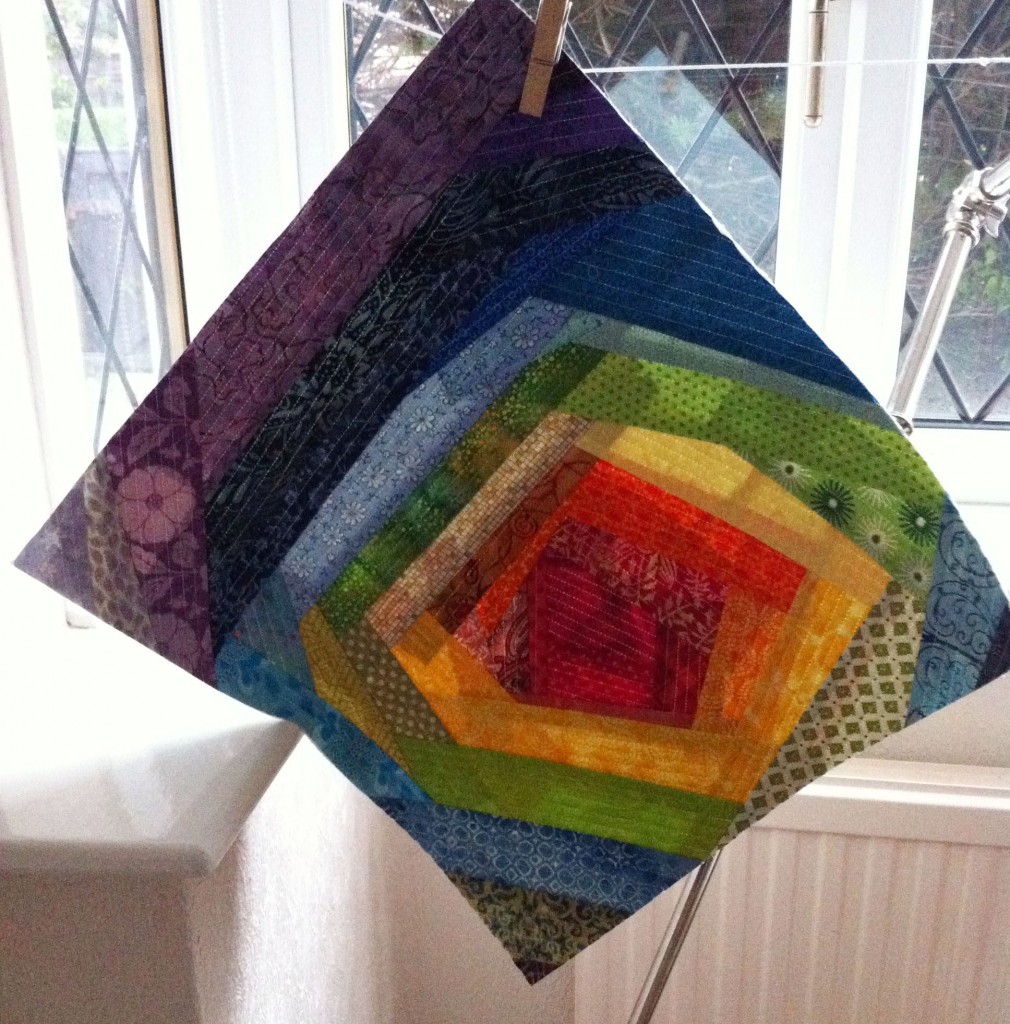 Quilt As You Go Block

You guys, I am in flipping LOVE with this block. Every time I walk by it I stop to gaze at it. It’s just a square of happiness! When the Germ saw it he immediately laid claim, so I’ll turn it into a cushion for him.

On my second day of discomfort at home I started on a table runner using the same technique. It’s early days on it yet and I made a really stupid value mistake on it, so I’ll need to find a way to fix it without unstitching three thousand rows of quarter-inch-apart stitches.

Quilt As You Go table runner

I also spent some time playing with free-motion quilting. I’m fine with stippling, but I’m going to need a massive amount of practice for any other shape. Something to look forward to in my impending life of leisure. Speaking of, I was really excited that I only have a week left to be at work, but then I found out that I owe four days of holidays and now I’m going to go sit in a corner somewhere and cry.

* An affiliate link means that I may get a commissions if you decide to purchase anything from the company I linked to, in this case Craftsy.com. I only recommend products and services that I use and love, so I know you’ll be in good hands.

This site uses Akismet to reduce spam. Learn how your comment data is processed.